The Žofín Palace is a Neo-Renaissance building situated on Slovanský ostrov (Slavonic island) in Prague. The name of the palace refers to Princess Sophie of Bavaria. It is protected as a cultural monument of the Czech Republic.

Scope of work: restoration of all lighting fixtures and objects of artistic and craft character, manufacturing copies of lights, radiator grilles and other objects for both the interior and exterior.

We took over the most beautiful chandeliers in Prague in bad condition; unprofessionally disassembled, their individual parts were thrown into wooden crates, which were only lined with newspaper and without any documentation of the previous state. In addition to other work, we spent 18 months professionally refurbishing the parts of the chandeliers. Before the final assembly, we created three piles in the basement of the Žofín Palace and then began assembling the large chandeliers. However, at the end of the assembling process we were left with three large brass lions with the Prague emblem, without knowing where they belong. We began searching through all of the available archived material, and it wasn’t until seeing the film about Antonín Dvořák that we discovered a short clip where we got a glimpse at the central chandelier on top of which the lions were sitting. This breakneck journey had led to success, as the chandeliers have been shining without any complaints since 1994.

According to the original samples, the glass for all the lights was to be made of opaline, which was no longer commonly produced at the time. So, at four o’clock in the morning, in the now defunct Košťany glassworks, the metallurgist and I worked with pans of molten glass (the opaline did not come out well) trying to figure out what to create from it. But with a bit of luck an inspiring muse always appears and so, a pale blue enamel was blown into the already prepared molds and was covered with a faint layer of opal. 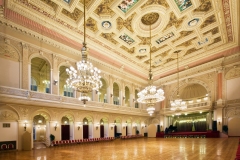 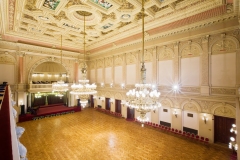 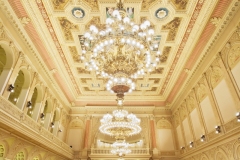 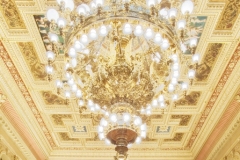 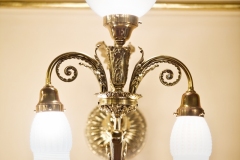 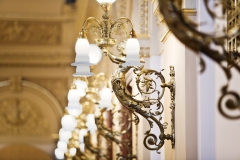 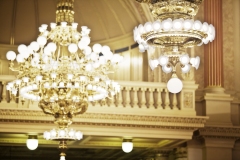 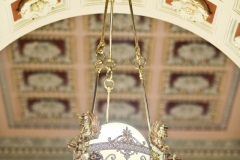 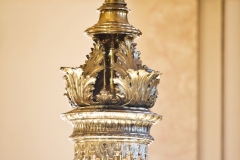 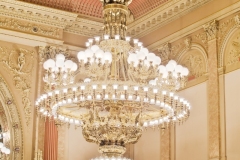 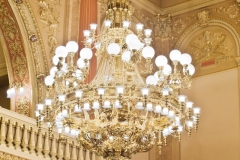 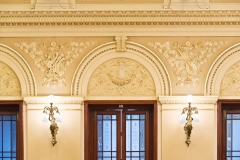 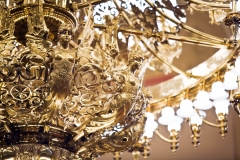 The Rudolfinum
Scroll to top